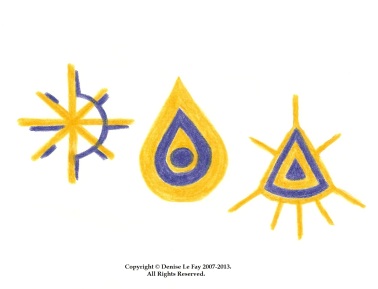 Near the end of this exchange of information from the three Starbeings in 1985, the Pleiadian stepped forward and extended his hand. In it was a large antique gold Key that he handed me. I took it from him and asked, “What am I supposed to do with it?” The Pleiadian responded saying, “For now, put it in your Heart. It will always be there and you can use it any time you need to.” So, I placed the large etheric antique gold Key to my chest and deposited it inside as he suggested while all three of them watched.

In other words he reminded me that, “The KEY is in my HEART.”   (The KEY is in each of our HEARTS, not our heads, not someone else, not some religion(s), not some guru, not some special location, not some dimension or star etc. but our own individual HighHearts.) 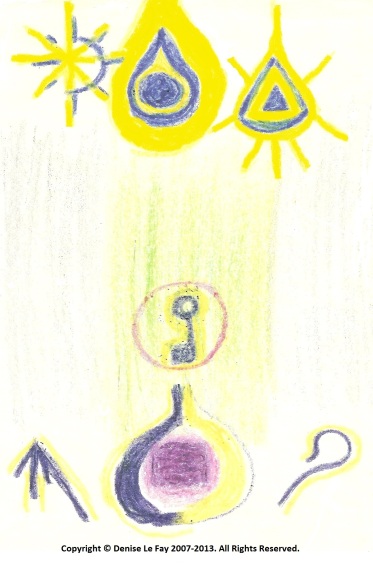 Currently this is a very typical message about what the 5th dimension, and the Pleiades, is all about. HighHeart/Love/Creativity. We’ve been hearing a lot of this same information over the past couple of years or so and we’re actually feeling and seeing our lives and reality changed because of it now. Never forget that the opposite astrological sign and Age of Aquarius is Leo and Leo rules the old lower 3D heart, now however it’s the much higher frequency 5D HighHeart, exactly where the “Key” exists.

In the original crayon drawing of January 1985, the symbol at the center and bottom of the page represented me, Denise, in 3D physical Duality but having come to Earth through the Orion portal. You can see the Orion blue and yellow-gold colors and symbol polarized. The pink and purple area inside it symbolized my heart within physical reality back then. The Key is THE KEY which I put in my Heart and have carried there ever since. The Egyptian Crook and Flail are from my past life around 12,600 B.C. with these same three Starbeings and is an article unto itself.

I hope to share all of these multidimensional, multiple but deeply connected incarnations, opposite astrological Ages (Leo/Aquarius/Aquarius/Leo) and much more here. These ancient connections to Egypt, Atlantis, Lemuria and more are all playing out in our lives and reality in this here and now timeline at the ending of the Mayan calendar. And, we’ve got lots of beloved Friends and Family watching, waiting, working and guiding us from the other-dimensional sidelines. It’s an amazing time to be incarnate on Earth, wrapping up all these ancient loose ends, while simultaneously living the Ascension Process and evolving higher and higher into the NEW.

Copyright © Denise Le Fay & TRANSITIONS, 2007. All Rights Reserved. You may copy and redistribute this material so long as you do not alter it in any way, the content remains complete, credit is given to the author and this URL https://deniselefay.wordpress.com and Copyright Notice is included.

Back in 1984 three other-dimensional Starbeings I knew from a past life in Egypt around 12,600 B.C., blasted their way back into my life and waking consciousness. I’d had clairvoyant/telepathic contact with the Orion and Pleiadian off and on since age 5, but what happened in 1984 was different. It was full-blown reconnection with all three of them making as direct a link with me, my sister, and my Mother as was possible for all of us back then. Evidently it was time for a fully conscious and functioning bridge to be build between the three (3) of Them and those of us here in human form again as “Starseeds”.

I’ll never forget the day it happened. My sister was living with me and my 10-11 year old son at that time. She’d been reading a book and called me out to listen to a part of it. While she read me this paragraph I suddenly had a past life memory come crashing into my mind’s eye. In an instant I had numerous scenes, knowings and emotional memories from this ancient Egyptian past life with 3 Starbeings—one from Orion, one from Sirius, and one from the Pleiades.

I interrupted her and excitedly started describing everything I’d just remembered and was still seeing. Here’s where it gets interesting. Part way through this, in mid sentence, my sister interrupted me and finished describing a past life scene I’d been telling her about! In other words my remembering triggered her personal memory of having been there too. In fact we were twin brother and sister in that Egyptian past life. I was the brother and she my sister. (We often travel in small family packs like this when we reincarnate.)

So there we both were, suddenly filled with memories and emotions of this super ancient past life in Egypt. That alone would have been fabulous but there was much more actually going on behind my sudden remembering. The same 3 Starbeings that were in Egypt in 12,600 B.C. when my younger sister (this life and twin sister in that past life) and I were there, had reconnected with me, and then her, that day in 1984. That was the real point behind all of this. For them to create a conscious reconnection with both of us and our Mother. When we shared this experienced with Mom a week or so later, she informed us that They had contacted her a couple of times in dreams during that time period too.

We both spent the rest of that day and night talking our heads off about everything we’d remembered from that past life. The next morning a strange phenomenon had manifested in a corner of the living room. Up at the ceiling where two walls connected, there was a definite three foot shadow or darker spot that looked like the area was warped or distorted. In other words, a portal had been made by Them (the 3 Starbeings) and it remained clearly visible for many months. Psychic vision wasn’t needed to see it because it was that powerful. They’d literally created a portal between the three of Them and with us inside my little physical apartment! My son’s friends would come running into the apartment and stop suddenly, look at the living room and ask, “What’s wrong with your wall up there?” The portal was that tangible. I’d just tell them that it was a weird shadow and left it at that. Other adults would look at it but not say anything.

A few months later my sister was giving a class at a local metaphysical shop and this one night I got to attend. She’d directed the small class into a simple meditation and then afterwards we were supposed to draw whatever we had perceived. She had supplied us all with drawing paper and crayons prior. Well, the 3 Starbeings took full advantage of my going into a meditative state (something I usually didn’t do) and they were right there with star glyphs or symbols, telepathic messages, suggestions and a few precious gifts.

After we’d come out of the meditation I frantically started drawing as fast as I could because I was concerned I’d forget the complex images and information They’d just given me. My sister knew something was up because of how wildly I was drawing. Crayons were flying right n’ left! In the end, I had a page full of symbols and stellar glyphs from the three of Them. Here is the original I drew with crayons that night in January 1985.

What’s funny is that in 1984 I didn’t even know where the stars Orion, Sirius and the Pleiades were in our night sky! Every time these 3 Starbeings would make clairvoyant/telepathic/etheric contact with me, They always stood facing me in this same diagonal line. The Sirian was always to my left and slightly back a bit. The Orion was always in the middle in front of me and a bit closer, and the Pleiadian was always to my right and closer to me. They always stood this way and at a slight diagonal. I knew it meant something, but I couldn’t figure out exactly what.

One night months later I asked my sister if she knew where Orion, Sirius and the Pleiades were in the night sky. She easily pointed them out to me and I gasped out loud. They are positioned in exactly the same way the 3 Starbeings always stood facing me during our conversations; Sirius is at the far left, Orion is in the middle and the Pleiades is on the far right side and all at a diagonal across the sky. And so, the Star Glyphs or Stellar symbols at the very top of my drawing are of SIRIUS first on the left, ORION in the middle, and the PLEIADES on the right side.

[See A Lightworker’s Mission for more information and illustrations.]

Copyright © Denise Le Fay & TRANSITIONS 2007. All Rights Reserved. You may share this article so long as you do not alter it in any way, the content remains complete, credit is given to the author and this URL https://deniselefay.wordpress.com and Copyright Notice is included.