This is a continuation of my past life memories in Egypt (as a male) around 12,600 B.C. I’ve already written a bit about what both the 5D Pleiadian—the Sacred Artist, and the 6D Sirian—the Sacred Architect Starbeings taught me and their numerous other Starseeds back then. Now I’ll share what I’ve remembered so far about the 8D Orion Starbeing—a member of the Sacred Galactic Council. [For more information see A Lightworker’s Mission: The Journey Through Polarity Resolution]

Personally I’m not terribly fond of titles like the one I just used above—the Sacred Galactic Council—but they’re necessary to even be able to express and share information like this. Like it or not, that was the title this 8D being from Orion was labeled with, just as the Sirian and Pleiadian were with their unique titles. These titles represented their home dimensional energies more than anything else so please keep that in mind and don’t think about this 8D title with old lower world 3D awareness.

One of my favorite training lessons in this past life was with Orion (that was the name he used at that time) and it was learning how to pilot a small two-seater UFO up and down the Nile. Now don’t freak out as this was normal way back then just like learning how to drive a car is for sixteen-year-old kids in our timeline. Most of us young Starseeds learned how to pilot these smaller UFOs because it was more about learning mental and emotional control and focus than anything else really. Those UFOs could be directed and flown by the pilots mental focus alone, or, by both mental focus and partial auto-pilot or total auto-pilot when one needed a break. Many of the tools in this life in Egypt (12,600 b.c. ) were used like this. The Ankh was another tool of many that was controlled by the operators focused mental and emotional energies. They were marvelous, highly advanced tools in themselves, but when mentally and emotionally directed by higher dimensional beings like Orion or the other Starbeings or Starseeds, they came to life and did amazing things; things like cut through stone like it was room temperature butter!

My personal memory of flying this small UFO was at first very difficult and extremely draining because of the lengthy and intense mental focus. You wouldn’t believe how exhausting it is to continually keep your thoughts on ONLY one or two things, like flying a UFO and not crashing, and not let them wander off into something else or just stare off out a window at the world below! So at first this was real serious work for me but with time and practice, it became easier to focus my thoughts and intentions for longer periods on what I wanted that small UFO to do…when, where, and for how long. Eventually it became much like driving a car in heavy traffic today; you know what you’re doing and its become second nature  or body knowledge,  but you still must pay attention to all that’s going on around you at the same time.

I have a crystal clear memory of solo piloting this smaller UFO up and down the Nile many times, logging flight hours evidently. We all used the Nile river below to know exactly where we were, kind of like that rope with attached floating balls on it to keep the little kids out of the deep end of the swimming pool! We used the Nile as a clear guideline that showed us where we were and to not fly too far away from it…our rope in the huge swimming pool that Egypt was for us back then.

I’d fly from lower Egypt (where the Sphinx and Great Pyramid was), south to upper Egypt (these names were not used in this life and time but were added later by others) where there were other large cities with huge UFO ports cut into the rock walls or cliffs. We’d park both the small and much larger UFOs in these huge carved out parking areas in the sides of cliffs much like large car parking lots or airplane hangers of today. We young Starseeds would pick up and/or drop off certain supplies between these main large cities using the small UFOs, so it was both necessity and personal training at the same time. The real ancients were terribly efficient and never, ever did something, built something, created something for only one reason. Their consciousness simply didn’t function that way; it was multidimensional and so they did things for many reasons on numerous levels and dimensions at the same time.

Another very powerful and special memory I have with Orion was when he’d have one of his Starseed students come to his teaching room. I have no memory of ever being in this room with another student. It seemed from what I’ve remembered so far that Orion preferred teaching all of us on a one-to-one basis.

Orion’s unique teaching room was a Holographic viewing room. When you first entered it there was nothing in there. It was empty and the walls were bare with nothing on them. It was a large dome-shaped circular room that was like a white movie screen where images where projected. It was an empty round room where, when Orion turned on whatever it was he turned on, you were suddenly hovering somewhere within the 3D Milky Way galaxy! It was holographic, three-dimensional, and you the viewer were INSIDE of it and could view the entire Milky Way galaxy from any location, point, direction or level. It was breathtakingly spectacular and very, very, intense all at the same time. Talk about feeling lost and insignificant! The concept of “Home” takes on a totally different meaning when you are aware of, and can physically see, far more locations of the “Homes” of different beings just within the Milky Way galaxy.

To visualize what I’m talking about place yourself inside this photo of our galaxy, make it real sized and 3D however and you can move yourself, your point of view around to anywhere within the Milky Way and view from there. That was what it was like inside of Orion’s galactic holograph viewing room.

After a few flights in Orion’s holograph galactic room he would eventually begin the real teachings. At first he didn’t allow you to speak while in his room but only view, adjust, feel and ponder. After you’d gotten over the shock of how vast and beautiful the physical Milky Way galaxy was, then Orion would begin the teachings and they had to do with educating you about inhabited locations within it. Orion taught us about our galactic heritage, the vast ancient galactic society, and the many physical locations within the Milky Way where all of us live/lived and/or came from. Orion taught Milky Way Galactic Geography.

Just like many people know states or countries (or even all of Earth)  like the back of their hands, Orion from 8D and member of the Galactic Council, knew the Milky Way galaxy like the back of his hand! It was that small and well-known to him as it was/is to many higher dimensional beings.

Once I got the basics down about what was where within the Milky Way galaxy, the next teaching step with Orion was about all the ASPECTS between numerous areas, star systems, and so on within the Milky Way galaxy. If you’re familiar with natal astrology and the aspects that astrologers interpret between the planets and angles etc. within our solar system in each natal chart, then this will be easier to grasp because it’s basically the same thing just on a galactic scale.

Orion tried to teach me how to read and interpret galactic aspects within the Milky Way galaxy. I know, I know—it makes my brain hurt just remembering and writing about it! He would eventually activate something else within his holographic room that looked like different colored lines of light that ran between different star systems and other galactic areas. There were “trines” and “squares” and “oppositions” and “sextiles” and so forth between many star systems and other galactic areas just like in individual’s natal charts. Orion knew these  galactic aspects and galactic transits intimately and he struggled to teach me and the other Starseeds this vast and complex but beautiful 8D wisdom.

This was/is the way Orion and most other higher dimensional beings view this galaxy where so many of us have inserted or seeded ourselves into denser vibrating physical 3D reality (that is currently ascending to 5D awareness and light vibration). They’re capable of reading the Milky Way galaxy and others like astrologers read natal and location charts; natal and location charts with current transits, progressions,  and so on. It’s the same thing to these higher dimensional beings…one unified area (the Milky Way) with plenty happening within it at different “times”, locations, galactic phases, cycles, transits etc. 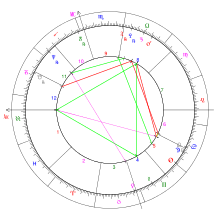 (This is not my natal chart)

See all the red, blue and green lines in the natal chart above? Those are lines showing the natal aspects within that particular chart. The graph below it that looks like stair steps with strange colored symbols in the little squares, are the natal aspects (between planets and angles) in GLYPH form. Orion’s holographic galactic viewing room would show different colored lines of light throughout the Milky Way galaxy that looked much like these different natal aspect lines, except they were three-dimensional not flat like this natal chart is. And of course Orion’s different colored galactic aspect lines moved and changed slowly with the different orbits and cycles. He could have his holographic galactic room show how things looked in the Milky Way far in the past, and he could move it far forward into the future (our current time) to show the positions and transits or alignments as they appear now. They’ve always known what was coming and the many potentials within our current times. This is why so many of us have reincarnated back on Earth now—to finish up this very ancient work.

Copyright © Denise Le Fay & TRANSITIONS, 2008. All Rights Reserved. You may copy and distribute this article so long as you don’t alter it in any way, the content remains complete, credit is given to the author and this URL https://deniselefay.wordpress.com and Copyright Notice is included.

My Ascension Process began when my Uranus Opposition transit started on my 39th birthday the last week of December 1990. By January and February of 1991, it was seriously underway completely dismantling my life, my relationships, career, place of residence and all else. My life changed dramatically at that time exactly as Uranus Opposition and […]

Only Two Months In & Wow!

Yesterday February 5, 2020 I lost half an article while writing it and I’m still having WordPress difficulties today but pushing ahead nonetheless. Because of these glitches this article isn’t looking the way I’d like and I know that bothers me much more than most of you. There’s a point to all this and we’ll […]

“I need to tell you a story that happened just after I read your post today. There is a park across the street from my apartment and for the past couple of years I’ve been watching people of all ages come and go to walk their dogs or run races or play games and generally […]