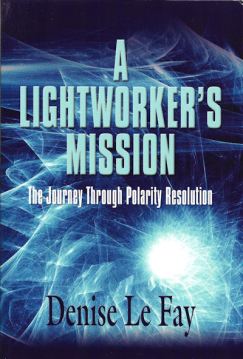 I want to offer some random excerpts from A Lightworker’s Mission: The Journey Through Polarity Resolution to give you a better idea of what the book is about.

“…Those of you reading this who have had the recurring dreams over the years of being in some large shopping Mall, a Library, University, Collage campus, Auditorium, Theater, or Hospital and running into different ET beings there, I hope you are recognizing the interdimensional connections within all of this. Those of us who are Wanderers/Starseeds/Lightworkers, typically have these types of etheric dream encounters and ET meetings most of our lives. In many cases, these dreams are the easiest and fastest way the Wanderer—in a human body and physical incarnation—is reintroduced to why she/he is back in 3D Earth physicality now. If the Wanderer/Starseed/Lightworker is more psychically open and can safely cope with conscious, interdimensional meetings and retain the memory of them, then that too happens with these types of lucid out-of-body dream meetings. These are both individual and group Lightworker/Wanderer dreams or out-of-body gatherings we have with some of our ET helpers, guides, interdimensional family and friends.

(Another aspect of this that many of you may relate to as well is the etheric dream meetings Lightworkers/Wanderers/Starseeds have within other people’s houses across the country. We do not physically know each other and yet, many of us have remained in higher-level contact with each other through these etheric dream meetings with other Lightworkers/Wanderers/Starseeds and sometimes with ETs present as well. During the 1980s and 1990s especially, we needed to meet like this to exchange information and remain up to date with our unfolding Lightworker missions and planetary service work. It doesn’t matter that we may never physically know or met each other; we have been in contact with numerous other Lightworkers living within the same country we do for decades. Stealth mode has been used by us for a long time to remain in contact etherically and exchange ascension-related information with each other when needed.)

Years ago, I read about some people suddenly seeing strange beings or ETs appear and disappear in different shopping malls in the USA. Earth has had so many Starbeings/ETs working from their nonphysial side of the Veil or border while numerous Wanderers/Lightworkers/Starseeds worked from inside this physical dimension and lower system here. Occasionally people would see these nonphysical ET beings pop in and out of different physical locations because they were portal areas. In some dreams, many humans would also use these same interdimensional portals to step through into a higher dimension and visit their ET friends and guides briefly while asleep and out of their physical bodies.”

“…December 2000 and I am still dreaming about past emotional issues. Just how much icky, dark junk did I have stored down in my basement anyway? Quite a bit obviously! So, back into the emotional body and astral trenches once again to excavate more ex-husband stuff, more beloved son crap, more me stuff, and plenty of I’m a female struggling in a dark and lowly Patriarchal world abuses and frustrations. Nothing new here except that my basement should be looking damned spiffy clean at this point.”

“…The Pleiadian stepped out of that invisible but clearly sensed diagonal line with the Sirian and Orion and stood close enough to me to hand me something. He bent forward from the waist slightly and handed me a large gold antique key. I took it from him and stared at it closely trying to figure out what I was supposed to do with it. He waited for me to ask him telepathically what it was and what I should do with it. Once I finally did, he smiled softly and replied, ‘The Key is in the Heart.’ He said I could place this key in my heart and later use it any time I needed. I did as he suggested and placed the large symbolic antique gold key to my etheric chest and deposited it inside my energy heart.

This key was not the answer nor was it some mystical or magical etheric tool. The Pleiadian was simply trying to express complex concepts to me then (January 1985) with as few words as possible. Higher vibrating beings often resort to this type of symbolic communication with those of us within polarized physicality, bodies and brains, simply to bypass our intellects and egos and reach the deeper levels within us that do understand. The Pleiadian was trying to stress that the Key is in the Heart and not the human egoic left brain intellect. He was trying to remind and prepare me for what was coming years later (1998–1999 onward) about much higher frequency 5D Heart consciousness. That was why he was stressing, ‘The Key is in the Heart’ and not in our lower, polarized, and limited third dimensional left-brain consciousness. In 1985, the Pleiadian Starbeing was reminding me about an entirely different and vastly higher way—a fifth dimensional way of being via the High Heart or higher dimensional Heart consciousness.”

“…During mid-1977, I had been working on some drawings and text for a local metaphysical newsletter when another scene from my ancient Egyptian male past life suddenly surfaced. Evidently, the drawing I had been doing was close enough to this particular Egyptian past life scene that it functioned as the deep-level trigger between the two lives and events.

In my mind’s eye I suddenly saw my past life male self in ancient Egypt using a small, hand-held device to cut into rock surfaces and carve beautiful hieroglyphs and colored artwork. The ancient device looked somewhat like a silver-colored metal penlight, or a small laser pointer, however, it emitted a tightly focused white laser beam of light. It was a small tool used to easily and quickly cut and carve stone in 12,600 B.C. Egypt. The real uniqueness of this ancient Egyptian laser tool was that it was entirely directed and controlled by the operator’s mental focus and emotions. There were no other buttons on it to operate, other than an on/off button. The tool functioned exclusively through the artist’s directed thoughts and emotions. The image you held in your mind’s eye was your model; the emotions you intentionally created at certain times controlled the different colors that the tool emitted and instantly embedded or painted on the stone.

This may sound like a fun tool to use, but it was highly intense work and there was absolutely no room for the artist to mentally or emotionally wander! The tool itself was directed exclusively by your thoughts, your intent, your desire, and emotions. Did I mention this small hand-held tool quickly and easily cut into stone as if it was room temperature butter? It was quite amazing really.

With practice, an artist could quickly turn on and off specific emotions within him or herself, which automatically triggered a specific color to be emitted. I remember intensity caused the color black to turn on, and a peaceful, loving feeling caused different skin tone colors to activate. Feeling joy triggered blue, and gratitude caused green shades to be activated within the tool. From our perspectives today this tool is amazing, but in that past life, it was merely another of many such common everyday tools.”

“…June 28, 2001 I went to bed and asked my Higher Self for a good conversation and a message came through instantly. It was simple and short but very powerful as they usually are. My Higher Self informed me that, ‘Just as the Veil between dimensions is disappearing, so too is the Veil between your conscious and subconscious mind; between your Astral body, the Mental, Emotional, Etheric, and Physical bodies.’ The second I heard this I knew what it meant and represented on a massive scale—not only for me personally—but for all humanity. My Higher Self meant humanity when it referred to ‘your’ and not simply me individually. It was a great insight into what I had been living through, struggling with, and being so terribly sick from.

A few hours later during the early morning hours of June 29th, I had a dream where I was going through an old book that contained a list of all the names of demons and what their individual talents were and so on. In this dream I was carrying on in a perfectly calm state as if this was business as usual and something I did every day. I found whatever it was I was looking for in the book, and so, woke myself up. I have no conscious memory of any of the information within that book in this dream. I didn’t care about that aspect of my problem with the demon, in the same way I have never been interested about the names of positive, higher dimensional beings and ETs I encounter. Once you have personally encountered one of these nonphysical beings—lower or higher—you never forget them or their unique energies. Their individual energies and condensed personalities are all the name I need or care about.”

“…2002 completed with December being an extra emotional month with more family and neighbor issues. It really was just more of what had been going on for years at this point; constant physical pains, sickness, new allergies, severe chemical sensitivities to seemingly everything, severe solar flare sensitivities, Mike’s endless drumming, demonic energies and unrelenting pressures and so on. It was exhausting and intensely frustrating never having any peace and quiet while I was so sick and constantly going through so much all on my own.

By this point, the extreme contrast of polarities was nearly too much for me. On the one hand, I and often Mom too had nonphysical and physical ET and other-dimensional contacts with certain beings, interdimensional insights, teachings, journeys and adventures that were much like being Home again. All of those higher dimensional energies and contacts against a backdrop of constant negativity and demonic and lower human assaults, ascension illnesses and pains, mental fog, emotional extremes, ultra-sensitivities to the world I was living in and profound, unending exhaustion. It was certainly an ongoing polarity battle and the most difficult and dangerous thing I had done in many lives.”

Here are a few more free book excerpts including a couple of illustrations to view through this first link. If you find these free book teaser excerpts interesting and entertaining, I hope you will consider buying A Lightworker’s Mission at the second link. I’m certain you will find it a highly interesting and unusual journey. Thanks and enjoy.