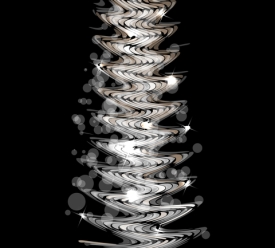 I wanted to talk a bit about the recent dramatic escalation of strange 4D Astral sights, sounds, voices, faces, thumps, bangs and abundant other weird images and strange bumps in the night type nonphysical phenomena. Some of you have been seeing, hearing, feeling, perceiving fifth dimensional and higher energies and beings also, but those things look and feel very different from these lower dimensional 4D Astral things. This article is about these other bleed-throughs that more and more people are experiencing at greatly increased rates very recently.

For the past month or two I’ve experienced a substantial increase of nonphysical phenomena. I’ve perceived this increase through clairaudiently hearing nonphysical sounds, voices, and other unrecognizable nonphysical noises while both awake and asleep. I’ve also been experiencing this substantial increase through clairvoyantly seeing all sorts of strange nonphysical faces or “head shots”, full or partial bodies, and/or groups of both humans and nonhuman beings/bodies moving through my higher visual field of perception. I’ve also been feeling what seems to me to be actual physical movements of my house, my bed, the floor under me, or a wall or walls around me moving a bit and so on. Also, strange and sudden shifts and/or slower movements of physical objects by nonphysical people, beings, energies etc. In other words, a wide variety of colorful nonphysical phenomena bleeding through into this dimension, world, and timeline. Sometimes it’s rather entertaining, other times it’s annoying and highly disruptive, and other times it can be downright shocking and disturbing.

One example was the other night while in my bed I distinctly felt the top mattress move and depress slightly as if something had landed on it. My cat was not in the room at that time, plus he’s heavier and I easily know when he has jumped up on my bed. What I felt was a nonphysical something or someone that caused a small area of my physical bed to physically move. (This same night my Mom experienced the same phenomena of her bed moving, depressing slightly from some nonphysical something or someone.)  I’ve experienced this many times over the past nearly 15 intense Ascension Process years, and some of these situations were caused by living humans that were asleep and in their etheric body moving through my physical space. Other cases of the mattress being moving from the bottom up were caused by Team Dark attacks but that’s not what I’m talking about here.

What I’ve experienced — as I know more and more of you are too is what I believe is us perceiving the actual shifting, moving, traveling, dispersing and the breaking apart of and Separation of Worlds and Timelines. I’ve waited and watched for increased clues that this massive and incredibly important change had begun at a physical level and I think many people are experiencing this recent and substantial increase of nonphysical phenomena that’s the start of this huge shifting process. The more sensitive folks have and will continue to experience, perceive, feel, see, hear, and in varying degrees be effected by these mega other-dimensional and other timeline shifts, bleed-throughs, changes and increasing separations. I’ve said a few times over the years that greatly increased phenomena would begin, plus greatly increased higher abilities in more people to perceive them. We’ve reached this point a month or so ago evidently because the wild multidimensional Three Ring Circus has begun like never before.

Another example of this that I’ve experienced for years but has substantially increased recently is sometimes clairaudiently hearing nonphysical human voices talking to each other. Take that but multiple it a thousand-fold and you start to get an idea of what this has been like lately. The old nonphysical borders and dividers between dimensions and timelines is so strange now, so transparent as to be nonexistent that these extreme and abundant bleed-throughs of 4D Astral energies, humans, non-humans, other beings, entities, thought-form created entities, thought-form created realities and objects are literally in the same space as you are now.

One more symptom of this strangeness before I forget is that I now often find myself dreaming while awake and doing other physical things like writing or house work or shopping etc. Now I don’t mean “daydreaming” at all but dreaming like when you’re asleep and out-of-body and in the Astral or higher dimensions dreaming. Needless to say this was rather strange when I first discovered that was what was happening, but now it’s just business as usual. How quickly we adapt. (This is like another Ascension-related symptom or upgrade of suddenly being able to see physical reality when your physical eyes are closed and your wide awake.)

We’re all moving and some of us are heading in one direction while great numbers of others are moving in many other directions and if you’re sensitive, clairvoyant, clairaudient etc., then you’re hearing, seeing, and feeling these multidimensional Grand Central Station-like chaotic shifts and changes. It’s sort of like trying to change lanes or merge into a bumper-to-bumper freeway and everyone is trying to change lanes to get to someplace different and all at the same time! It’s crazy, chaotic and with a high potential for multiple car accidents, road rage and so on. Welcome to the physical level start of the Separation of Worlds & Timelines and it’s only going to get more intense for the next couple of weeks.

From my perspective these past two months have been like there’s thousands of movies and TV shows playing and making noise all around me simultaneously and I’m having to hear and see many of them whether I want to or not. It’s just highly contested territory that I am, you are, we are traveling through now and, at times, the tremendous noise levels and insane inter-dimensional overcrowding bleed-throughs are simply WAY too much to cope with on top of everything else. When this happens I become over stimulated energetically, and sometimes emotionally, and absolutely have to shut down and get very, very quiet in the cool darkness of the day and get my vibrating, electrified, glowing, buzzing, overstimulated, exhausted self back in that HighHeart space and place during this greatly increased wild storm of change and separations.

When you feel yourself sliding out of that higher stable place due to these many different timelines and worlds bleeding through into this world, and/or seeing, hearing, feeling 4D Astral debris and other weird anomalies and strange wormhole type business, get quiet and calm and shut out as much of the multidimensional, multiple timeline Three Ring Circus as you can for as long as you need to get back into your HighHeart frequencies and balance and self-empower once again.

Donations can be made here   and thank you.

Copyright © Denise Le Fay & TRANSITIONS, 2013. All Rights Reserved. You may share this article so long as you don’t alter it in any way, the content remains complete, credit is given to the author and this URL https://deniselefay.blog and Copyright Notice is included.