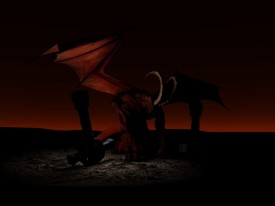 “Oh Man! This is huge! I’ve been dealing with this for so many years and yeah, I know when I tell people about some of my experiences they look at me and you can tell they want to pat me on the back and say, “There, there. You’ll be ok.” I have sensed dark entities since I was a kid, when my grandmother used to tell me to make the sign of the cross with my fingers and yell at them to leave in the name of God! And that seems easy compared to what I’ve been bumping up against lately!

So Denise, anyone, everyone – what the hell do you do when you have people in your life that are so dark, so awful? Not just friends, because I’ve been able to shake a lot of them off, but family, damn it! There they are, stuck in your face, trying to suck you in to their darkness and all the family drama that comes with them. I call them emotional vampires and some of them I think are sociopathic – no conscience, no feelings, just stuck in their own shit – you get the picture. Just when I feel like I’m holding my own – bam! Either the phone rings or they show up at my door with their bags of garbage and negativity, giving away free guilt trips. I just DON’T want to fix them anymore, I don’t want to be part of their drama, I just want peace.

I digress. IS there anything that can be done for these dark humans? Once they are so sucked into the darkness, is there any hope or help for them? Or should I just meet them at the door with a cross? This is so difficult, for me anyway. I’ve always been the “fixer” but I really really don’t want to fix any more, but I also really really don’t know what to do, other than run and hide!”

This is in response to many of the Comments left by readers about my Etheric Attachments & Possessions article of May 26, 2010. This topic is another huge, multidimensional complex and difficult aspect of being a Forerunner/Lightworker/Wayshower/Starseed living the Ascension Process that people experience. Next in line is often with the ascending persons husband/wife, lover/mate, parent/parents, siblings, friends, co-workers, neighbors, community etc. You have been activated to evolve and transmute yourself via the alchemical Ascension Process, or, you reincarnated as a Forerunner/Lightworker/Starseed/Wayshower to work from within the old lower negative system to break it up, bring in higher frequency Light energies, embody those higher frequency Light energies in yourself and your body first and Wayshow the rest of humanity who’ll begin the Ascension Process a decade or so later. [During the alchemical Ascension Process we encounter—in varying degrees of intensity, resistance, frustration and difficulty—many other people who are NOT and may never enter the Ascension Process in their current incarnations as we have. Obviously this can and usually does create huge tensions and plenty of emotional pain for both sides as Lou Ann and Chrysalis and others here have shared.

We’ve got multiple things and multiple dimensions going on within this one topic of Etheric Attachments & Possessions by negative Dark nonhuman entities attached to certain humans, and the Ascension Process, and Family of Light, and Family of Dark. We’re also talking about having to deal with humans that have an attached etheric negative entity and it controlling them and also trying to control everyone around them—especially you because you’re waking up and shining Light all over what’s been the Dark’s 3D territory for a very long time! And we’re talking about how some of us have been dealing with the Family of Dark—to borrow a great Barbara Marciniak term—since our early childhoods as Robin has mentioned. Others have had encounters with negative beings, aliens, entities and energies in their different forms but only since their physical Ascension Process began.

As you can see there are a number of levels and layers to this topic because it is multidimensional, because we are multidimensional and are affected by other beings (both positive and negative) that exist in dimensions other than 3D. This has always been the case, but now with the ongoing ascension process and dimensional shift, the multi-D pot has gotten shaken up real good and the Veil or borders—especially 4D the astral plane—are wide open and citizens from 3D are traversing 4D and beings that have always existed within 4D are walking right into 3D with the greatest of ease.

So how to dodge the Dark negative in all of its many forms even when it may be a family member? Eventually you will, for your own sanity, safety, and continued spiritual growth within the ascension process, have to make a decision about not continuing to move forward vibrationally yourself and remaining back with other family members and/or loved ones, your own children, husband or wife etc.  or stepping away from them so you can continue evolving/ascending now. It boils down to that choice for each of us. I’ve had to do it with some family members, my child, and all of my physical friends over the past decade. As much as Lightworkers are “fixers” as Chrysalis correctly called it, in the end it is only us that we’re supposed to really “fix” now. When we do our own ascension Work, we make it so much easier for other people to then begin the Process themselves. But, we’ve got to do it for ourselves first and not the other way around.

Back to Chrysalis’ question about how to protect oneself from lower frequency family members that are not living the ascension process but you are. This may sound harsh but if you’re over 21 years of age, then I think it best for the ascending/evolving person to get away from them and any other people who are trying to stop or suppress you and your Ascension Process. Whether they are just unaware of what’s happening and why, or if they have a negative entity attached to them etherically or worse, or if they’re hard-core religious people incapable of growing beyond those limited immature and incorrect old belief systems, if any of these problems are aimed at you because you are growing, evolving and changing, then you need to disconnect from those people for as long as needed. Believe me, nothing causes them to then have to deal with themselves when they no longer have you to project upon for whatever their reasons! It takes two to tango as the saying goes, and your disconnecting has repercussions on them and it amazingly is usually exactly what they need to finally begin getting themselves together too. Or not.

There are many great books available that teach different methods of etheric protection so I won’t get into that here. I may in another article and if you are interested in that aspect of this topic write a Comment and let me know. I suggest that for your own sanity, continued growth, happiness and soul mission you change your situation so the person or persons who are trying to control you for whatever their reasons cannot any longer. This next statement may also sound rather harsh also but it is often very painfully true.

In many cases the 4D “monsters” — devils, demons, entities, negative aliens, possessed people, the emotionally and/or mentally imbalanced, the fractured people in our lives (especially during the time we’re living the Ascension Process first) are giant Duality mirrors for us, plus the painful irritations to guaranty that WE will continue with our spiritual, evolutionary ascension journey all the way. On the other hand, many but certainly not  all of these people who are deep in negative energy and/or possibly have etheric attachments and worse are not your concern at this point  within the Ascension Process. Never forget that if we don’t do it here now, we’ll go elsewhere that’s a better energetic match to us and continue on with our growth, education, creativity and spiritual development there. So no one is really left behind or left out; it’s all about personal choice and not about “good/bad”, “right/wrong” etc. at all.

Note: Today transiting Uranus entered Aries which will activate further changes everywhere. Just an astrological reminder as this is a potent energy change.

Copyright © Denise Le Fay & TRANSITIONS, 2010. All Rights Reserved. You may share this article so long as you don’t alter it in any way, the content remains complete, credit is given to the author, and this URL https://deniselefay.wordpress.com and Copyright Notice is included.