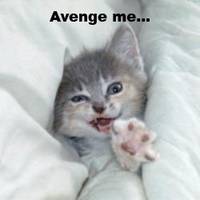 For the past six months now my four-year-old cat suddenly started acting like he had fleas. He’s an indoor cat but I built him an enclosed area on the patio outdoors, only so he could be a ground-level and lay directly in the sunlight. I thought maybe because of him being able to get down to ground-level that was how he’d gotten fleas, even though that didn’t make a lot of sense to me.

After a couple of weeks of him suddenly freaking out and frantically licking, biting, licking some more and then running away rapidly from the pains he was feeling, I bought some cat flea stuff. I hated having to use anything on him but this situation was quickly becoming unbearable for him and us. The poor guy would be sound asleep when he’d suddenly wake up and lick his right back leg, then his front leg, then the left back leg all within a few seconds. He’d run through the house trying to outrun the pain, or he’d suddenly come leaping up on my lap with toenails flying everywhere, wanting me to make it better and make his miserable and mysterious stinging pains stop.

I tried brushing him every day, wiping his coat down with a damp wash-cloth, plus three months of flea medicine but he’s still running through the house  having those sudden biting pains. After going over him repeatedly with a flea comb and then bathing him in flea shampoo, I finally realized he doesn’t have fleas—he’s having what I call my stabbing ice pick ascension pains! I wondered how he could have ever gotten fleas in the first place, but after all these months of using flea medications on the poor little guy, I realize he never had fleas in the first place.

These particular ascension pains that I’ve called the ice-pick stabbing pains feels exactly like that; like someone suddenly stabbed you somewhere on your body in a bone and the pain is extreme, but thankfully only lasts a second or two or three. I’ve had this in knuckles, in fingers, toes, ankles, wrists, thigh bones and arm bones. It isn’t muscle or joint pain and it isn’t arthritis—it’s intense pain in a certain tiny spot in a bone. I finally realize that this is what my cat has felt for the past six months now so I’ll stop assaulting him with nasty flea treatments.

When I’ve tried to discern what this particular ascension symptom and bone pain is, I get the sense that changes at a deep cellular (probably DNA level) are happening or being upgraded. This ice pick stabbing pain increases if I spend some time out in the Sun which tells me that it’s most likely cosmic, higher dimensional energies that are triggering these ascension changes in our bodies and DNA etc. It’s a good thing—it just hurts like all hell for those couple of seconds it happens!

So if your cat or dog suddenly starts acting like something invisible is biting him/her and he’s running around frantically trying to get away from the pain, remember this story about my very healthy and flea-free cat. 😉  After you’ve checked carefully to rule-out if there is anything physically wrong, give them a daily or weekly brushing and/or a gentle massage followed by lots of love and they’ll be fine. We forget that our beloved pets—our partners covered in fur—are also going through this ascension process and that they need to have some extra attention, love, and grooming from us sometimes. We’re all in this together.