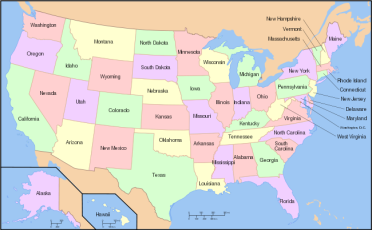 After making the necessary consciousness and energetic increase I was immediately shown a minds-eye image of a beautiful Native American Indian woman’s bare hand. It was stretched wide open and poised about a foot above a large colored map of the USA. This female Native American hand was first positioned at the northeast coast of the USA and a couple of her fingers actually went out over the Atlantic ocean, and her thumb, index and middle finger came inland many miles. Her hand covered a good sized width of land and a bit of ocean.

Very slowly the open hand moved south down the eastern coast of the United States and I clairvoyantly watched and sensed what this visual symbol was saying. The hand continued down the entire east coast of the USA, across Florida, then slowly over all the southern states following the border between the southern USA and Mexico, as if Mexico wasn’t there. Next, the hand continued slowly up the west coast of the USA, moving from the Mexican/USA border northward along the length of California, then Oregon and Washington. The hand stopped at the USA/Canadian border as it had with Mexico. I took this to mean that the message was focused on the USA only because that was the only area I had considered. If I’d considered possibly moving to someplace in Mexico, Canada or elsewhere on the planet, then I’m certain this vision would have continued to reveal this information in those countries as well.

Once the hand reached the Canadian border it closed into a loose fist and immediately moved right to hover above some states where it remained until this vision ended. Her fist hovered over North and South Dakota, Wyoming and Montana. I then clairaudiently heard this Native American female say that her fist represented ‘the heart’ and that those four states were ‘the heart of the country’. I assumed that physical area was very important to Native Americans of the past and that was why she said what she did about them. Her statement was about energy in those areas more than anything else.

In 1992 ‘global warming’ was unknown and not within the planetary Collective. I’d certainly never psychically perceived anything about it, but this vision strongly indicated where flooding in the USA was most likely at some point in our near futures. In 1992 I never bothered to ponder over what may cause such extreme flooding and so far inland. Because I lived in SoCal at that time, and still do, I thought that rising ocean water might come all the way inland to where I live according to what this vision was indicating because her hand covered that far inland. I also wasn’t much impressed with the thought of moving to either of the Dakota’s, Montana or Wyoming. I didn’t feel a strong connection to those states and knew I wouldn’t move there. So, what was this 1992 clairvoyant vision message really about?

From about 1995 on I had repeated clairvoyant visions of the largest, worst, most horrific tsunami coming inland along California and destroying pretty much everything. It was one of the most devastating psychic visions I’ve ever seen, and trust me, that’s saying something! I had this same clairvoyant vision for many years which made me feel that it was a very strong probable reality. A few years into my Ascension Process, I finally understood that it had much to do with changing many probable realities and ‘Earth Changes’ that had been very near to happening physically. Due to many people starting to live the Ascension Process in 1998, 1999, 2000 and 2001, much of those unimaginably devastating Earth Changes were transmuted and will not happen. Lightworking covers multiple categories and levels.

Since the beginning of 2009, it’s feeling and looking like some milder versions of—I repeat some—of these Earth changes have reached the point where they just need to shake, flood, burn and rattle and roll! They won’t be anywhere near as severe and devastating as they would have been prior to the First and Second Waver Volunteer Lightworkers activation with living and embodying the Ascension Process in the early years. Much was transmuted between 1999 through the first-half of this decade so that the Earth Changes would not be as severe and widespread. However, it’s feeling like there’s going to be some excitement again with Earth, humanity, reality and consciousness as this massive transitioning process compresses and accelerates for the rest of our lives and beyond.

Weather, Earth Changes, societies, belief systems, physical systems and structures, human health, human mental and emotional health and consciousness itself are all interconnected with each other. None of these things are isolated or disconnected from all the other things. This is one reason the weather is so schizophrenic-like now. Wildly strange or abnormal one day, then the extreme opposite the next day. Earth Changes? How about Reality Changes and Consciousness Changes! Of course Earth Changes are going to happen in varying degrees because they must because Earth and the Sun and our local solar system and much more are all going through this Universal Ascension Process now.

I don’t know if my 1992 vision of massive flooding where that Native American Indian woman’s hand indicated is still a physical possibility. To some degree I sense it is—much more so in certain timelines than others—but not as severely as I perceived in 1992. I do sense the earthquake activity will increase worldwide and that many old lower things will simply be leveled. Fire and water are great natural ways that transmute lower frequency energies in physical locations very quickly. So as you and I continue to live through our ongoing Ascension Process, remember that Earth and everything and everyone else is involved in this Process too, even if they don’t believe in it or aren’t consciously aware of any of it. No fear, just more transitions.

Copyright © Denise Le Fay & TRANSITIONS, 2009. All Rights Reserved. You may share this article so long as you don’t alter it in any way, the content remains complete, credit is given to the author and this URL https://deniselefay.blog and Copyright Notice is included.

Everything Will Go Back To Normal Now!

Dream on deluded, self-deluded, unaware and misinformed people. Nothing will ‘go back to normal’ now or in 2021 or in March 2021 or in 2022 or ever. Of course many will continue trying to keep things exactly as they’ve been but it won’t work because “old normal” has expired. The Great Cycles turn to the next […]

I know it’s been extra rough emotionally, psychologically and painful physically throughout October and November 2020 because we continue to embody more and more of the NEW higher energy codes coming in. Coupled with that has been a nearly constant state of having personal life memories suddenly pop up into our consciousness for the last […]

We’ve been so beaten about the head and shoulders this year that at times it’s been difficult to tell what all was causing what in our heads, and hearts, to hurt so severely. Has it been the media? The pandemic? Politics? Systems collapse? The unaware mentally manipulated human populations? After all, the real war really […]