One day in early 1980 I had another of many clairvoyant and clairaudient vision messages. It was the middle of the day when suddenly I could psychically see and hear two grand and very large nonphysical beings talking above me. They were discussing an upcoming event that was going to happen in southern California where I lived. Because this event was a huge and devastating earthquake slated for the heavily populated L. A. area, these two huge beings were discussing the numbers of lives that would be lost because of it. I did nothing more than watch them and eavesdrop on their very serious considerations about the tremendous death and destruction that this upcoming earthquake would cause in SoCal at that time.

Clairvoyantly I saw them as transparent androgynous giants far up in the sky above me. They seemed to me to be some form of etheric guardians and overseers of humanity and our planet. Even though they were concerned about the massive loss of life, physical destruction and deep trauma that this upcoming earthquake would cause to southern Californians, they considered it all like wise Elders making plans to protect their young children. They had a vastly larger sense of compassion and considered this potential disaster from a higher or quantum point of view that’s hard for me to express correctly. They looked at this coming quake to SoCal from the standpoint of how the massive deaths and emotional trauma and physical destruction would affect everyone and everything. And I mean everything! That’s how much higher their point of view was.

I stood listening and watching them talk back and forth about the numbers of dead, the freeways that would splinter, the numerous of uncontrolled fires afterward, the homeless, the dead, the injured,  the massive damages, the long-term emotional trauma to so many people for so long. In the end, the two of them decided that allowing this upcoming earthquake to play out in physicality in that location would cause far too much damage on far too many levels for far too long. And so, they decided to re-route this  potential earthquake to another physical location that would NOT cause as much death and destruction.

One of the huge nonphysical beings suggested that they should re-route this particular potential earthquake up from southern California, riding  north along a fault line right out of California completely.

They discussed this possibility a bit further, working out all the difficulties, potential problems and repercussions that this great change would cause. In the end, they decided that re-routing the large coming  L.A. area quake all the way out of  California along a fault line and into a more open, rural, less populated area would—in the long-term—be far better. And so, they changed this particular probable earthquake event after about two minutes time. That was the end of my clairvoyant and clairaudient vision message.

The next day I phoned my Mom and told her about what I’d experienced with these nonphysical beings, the huge upcoming SoCal earthquake and how they’d decided to re-route it all. (Back then telling Mom was about the only way I’d bother to record or document my psychic visions, impressions and higher dimensional messages and information. It was too crazy and nerve-racking trying to tell the police about upcoming airplane crashes or really serious potential events like this, so I’d just call Mom and share it with her. Over the decades my mother has shared the great insights, and the deep lows, of my being a sensitive, psychic,  and multidimensional traveler. She’s been my main witness to many of these experiences and events.)

It was about 3 months later, just long enough that this experience had faded from the glaring forefront of my mind, I heard on the TV news that Mt. Saint Helens had erupted. I didn’t even know where Mt. Saint Helens was but I intuitively knew in that moment that it was our southern California earthquake the huge etheric beings had deflected up the fault line and out of California. They re-routed that potential  SoCal earthquake right up and out of that huge mountain in Washington state. 57 people died from the May 1980 eruption of Mt. Saint Helens; many hundreds more would have died in the potential earthquake originally scheduled for southern California at that time. 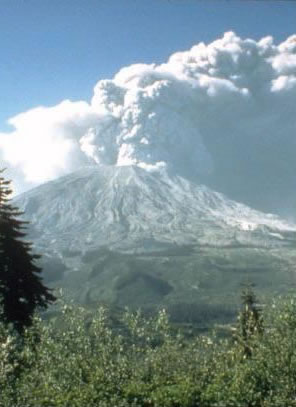 I shared this decades-old clairvoyant experience to let people know that things like this oftentimes work in radically different ways than what we think or know. Often (but certainly not all) massive global events are tweaked, shifted, lessened as much as possible or relocated for different reasons from etheric levels and are carefully considered and overseen by nonphysical beings to lessen the impact and trauma to all.

Copyright © Denise Le Fay and TRANSITIONS 2008-2012. All Rights Reserved. You may copy and redistribute this material so long as you do not alter it in any way and the content remains complete, credit is given to the author, and you include this copyright notice and link. https://deniselefay.wordpress.com/