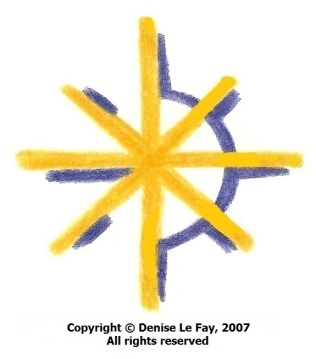 This is from my male past life in Egypt around 12,600 B.C. I’ve talked a bit already about the Orion, the Sirian, and the Pleiadian beings that were present there in other posts,  but because I had a lovely Sirian contact this morning, I feel I must talk about this past life scene today. It is an extremely special and fond memory of meeting the Elder Sirian Lion Beings as a teenage Starseed in ancient Egypt. [For more information plus more other-dimensional Beings portraits see A Lightworker’s Mission: The Journey Through Polarity Resolution.]

The three Starbeings—the 8D Orion, 6D Sirian, and the 5D Pleiadian—told a small group of us Starseeds that we’d be meeting some very ancient sacred Elder beings later that afternoon. All eight or nine of us were very excited to be able to meet these Elder beings as they didn’t come into physical reality very often anymore. It was evidently very difficult for them to remain in lower physicality for long, even back in 12,600 B.C., so we realized what a rare and special gift it would be just seeing them.

When the time was right the three Starbeings (Orion, Sirian, Pleiadian) led us teenage Starseeds outside to meet these eldest of Elders. We were instructed to be quiet, move slowly, show as much restraint as we could and to not bombard them with questions. All of us became even more excited by these restrictive guidelines from all three of them. It was obvious they were very serious about how we behaved in front of the Elder beings, and we had every intention of obeying them. Little did we know of how these ancient Sirian Elder Lion Beings would actually affect us!

Once we all reached the outside meeting area we stood in the brilliant Leonine Sun waiting for the Elders to arrive. A few minutes later, a small party of magnificent Lion Beings silently glided in from around a corner-stone building seemingly out of thin air. The 3 Starbeings lowered their heads slightly and waited for the stunning feline group to settle in front of us. I just stared at them with eyes wide and heart pounding with excitement as did most of us young Starseeds.

There were three male and two female Elder Lion beings in this group. One male Elder stood in front and the four others stood behind flanking him. They all were very tall and slender beings, standing between 7 to 7.5 foot tall. They all had a soft tan-colored fur over their whole bodies. But it was their wondrous manes that moved me deeply. Their manes were their hair and they flowed around their lion faces and hung well down over their narrow shoulders. The females had tied small random jewelry ornaments into their manes.

[Fig. 3.4 from A Lightworker’s Mission by Denise Le Fay, artwork by Yasmeen Harper]

As we Starseeds stood there staring at them we each began being effected by the high pure energies they emitted. It was like we were getting high on catnip! We all started shuffling around giggling quietly and grinning like fools. The 3 Starbeings kept glancing over their shoulders at us and frowning at us which meant, “Remember what we told you earlier about how to behave around Them?” But it was hopeless, we were already intoxicated by the magnificent feline Elders and the three of them knew we’d be affected exactly like that.

After a few moments of the three Starbeings talking with the Elder Lion beings they told us we could slowly and quietly come closer to them. We all shuffled forward like we were six years old, giggling, shy, but falling in love with them more and more each minute. The Lion beings looked down on us with such profound love and gentleness it was almost too much for one’s heart to endure. They were our ancient beloved great, great, grandparents from Sirius and we Starseeds fell deeply in love with each of them that day.

These giant Lion Beings from Sirius opened their arms to us Starseeds and we all fell into them and almost melted. We fawned, we petted, we cried, we attached ourselves to each of them. I wrapped my arms around the one front male Elder and buried my face in his fur and never wanted to let go. My head only came up to just above his belly, they were that tall compared to us. They emitted nothing but the purest and highest LOVE I’d ever experienced and it was intoxicating being within their space, within their presence. The three Starbeings stepped back and let us have our rare moment of bliss with the Elder Lion beings. They looked on like the loving but stern parents they were to all of us young Starseeds.

We talked softly with the Lion Elders and they with us. It was clear they loved and missed us deeply but it was also obvious why they couldn’t be in physicality for very long. It was simply too dense, too heavy, too unloving an atmosphere and dimension for them to be in for very long, even back over 12,000 years ago. Like a fish out of water, they could only be in physicality for just so long before they had to go back Home again.

After about a half hour we had to let the Elder Lion beings leave. We Starseeds openly wept like little children, and the Sirian Starbeing kept shaking his head in disbelief at us. We thought we wouldn’t emotionally survive them leaving Earth after falling in love so deeply with all of them that afternoon in ancient Egypt. But, they had to go back Home, and so the meeting ended far too soon for all of us.

Needless to say, it’s near impossible to find drawings that even come close to what I remember, but I did find one drawing about three years ago that is very similar to what I’ve remembered of these Elder Lion beings since 1984. It’s a drawing I found at the website The Nibiruan Council. Here it is with a link to the site.

Copyright © Denise Le Fay & TRANSITIONS, 2007. All Rights Reserved. You may copy and redistribute this article so long as you do not alter it in any way, the content remains complete, credit is given to the author and this URL https://deniselefay.wordpress.com and Copyright Notice is included.

“Here I am wondering from an experience yesterday, if Phase2 also involves more vigorous, last ditch efforts by certain factions to harm or take out volunteers. Certainly I do not mean to cause fear or to be an alarmist by raising this question. I only want to understand (with your and others’ perspectives and inputs) […]

Thought I’d share this latest strangeness. This morning, March 24, 2020, I had to finally brave it and go out to forage for food and all those other necessities we all still need. So, before the sun was up, I headed out for my local Super Walmart store because Walmart has, in my area, given […]

Based on how intense, severe and surreal life and reality has been since January 2020, it shouldn’t be surprising to anyone that the first Equinox of Phase 2 will be like nothing we’ve experienced before. It arrives March 19, 2020. No toilet paper stockpiles or face masks needed, only your HighHeart, higher abilities and anchoring […]