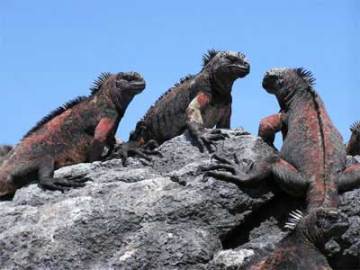 In 1961 at the age of ten I vividly remember pouring through a large Time Life book my parents had. As a kid I found all the beautiful oil paintings and other images in it quite magical. There were paintings by talented artists about what they thought the ancient civilizations might have actually looked like. It was however one particular oil painting that rocked my childhood world when I first saw it in 1961. It was of dozens of sea iguanas laying on huge rocks at the ocean. At age ten, they were ‘monsters’ sunning on rocks, but the longer I scanned over the whole painting I discovered one thing that triggered a memory… a realization I’ve never forgotten since that day.

In the painting the artist had drawn many of the iguanas’ shoulder and arm muscles just like  large, strong, well muscled human male. The split second my ten-year-old eyes landed on this one iguanas heavily muscled should and arm, another mind’s eye image came rushing up and out into the light of my young consciousness. It was the image of a huge male Reptile Being. A ten foot or taller massively muscled humanoid Reptilian male that stood upright. (Look at the knee and leg muscle of the sea iguana in the photo above and also the shoulder and upper arm.)

The reality of non-physical, non-human, other-dimensional Beings that look like 7 to 12 foot tall bodybuilder Lizards instantly became another strange and scary aspect of my childhood reality that day. I didn’t have a “past life” memory of what we today call the Reptilians; their existence reentered my consciousness because the sea iguanas were a close enough match and therefore a trigger for me to remember their existence. It was just another of many bizarre memories and knowings that I’ve carried for most of my life in silence…until now.

Then one evening about six years ago I’d gotten into bed and turned out the lights. I was laying there feeling peaceful in the dark when suddenly this vivid clairvoyant image intruded into my mind’s eye. Using psychic terms, a nonhuman, nonphysical, other-dimensional Reptilian Being deliberately made conscious contact with me clairvoyantly that night.

I was used to having meetings and conversations with certain higher dimensional Starbeings/ETs, but this was very different. This meeting was about this particular Reptilian Being WANTING me to psychically see him so he made a clairvoyant connection with me. (I spent 2 days searching for photos and images that come the closest to what I’ve seen of “him” popping in like this three different times during that year. These are pretty good photos but of course not completely accurate.)

What I found extremely interesting about all of my encounters with this one male Reptilian Being was that he was easily able to prevent me from psychically reading him and his thoughts. He had cloaked his thoughts and intentions so I couldn’t perceive or sense anything other than what he was allowing me to see and perceive then. I got the sense he was intentionally showing me that Reptilian Beings do indeed exist, but he only allowed me to psychically see his right eye and portions of the right side of his face up very, very, close. This clairvoyant image was exactly as if he were only 4 inches from my physical face! It was very intense, even with him blocking out all emotional and telepathic contact between us. He knew I was trying to psychically read or scan him and he simply remained steady with his psychic barricade up which prevented me from doing so. I guess he felt it was only time for a conscious re-reintroduction and not much else as yet.

A few months after these nightly in-my-face meetings with him, I saw massive, full-body Reptilians etherically superimposed over some well-known American and foreign world leaders and government officials on the TV news one night. No, I won’t name names, but it’s very easy to discern which of these humans is being controlled and manipulated to carry out Dark agendas on physical 3D Earth. I took these clairvoyant TV images I saw then to mean a couple of things:

It wouldn’t surprise me at all if both of these are the case and probably much more that I’m unaware of at this point. Things are far more complex and multidimensional than we fully realize as yet, and there are so many more players both positive and negative within this vast cosmic Plan.

At any rate, I feel that the Reptilian Being that deliberately revealed himself to me six years ago did so for different Ascension related reasons. It was also time for me to connect the dots from my early childhood memories with today and all that’s happening on the planet and within humanity via the Ascension Process. Humanity is horribly unaware of the many different long-term multidimensional players that are invested one way or another in our narrow band of 3D Earthly reality in this neck of the Great Cosmic Woods. Soon this too will change as we ascend/evolve back into conscious “Universe Society”.

Copyright © Denise Le Fay & TRANSITIONS, 2007. All Rights Reserved. Permission is NOT given to use this article in any custom videos. You may copy and distribute this article so long as you don’t alter it in any way, the content remains complete, credit is given to the author and this URL https://deniselefay.wordpress.com and Copyright Notice is included.

10 thoughts on “The Reptilian Beings”

What Wasn’t Included In My Previous Article & Why

While quickly quoting the Spaceweather.com article ‘The Termination Event’ on June 11, 2021 and adding my ascension perspective to it in Greater 2021 Phase 2 Solar Changes, I got hit so abruptly and so hard by incoming energies that I couldn’t finish what I’d intended to say in it. I apologize for that articles abrupt ending […]

I just found this information this morning at https://www.spaceweather.com/ and The Termination Event | Spaceweather.com (spaceweatherarchive.com) and felt it needed to be shared immediately. Because this information has presented a few days before the June 2021 Solstice, I feel it’s related to both Phase 2 of the Ascension Process and the increased and different strange, lonely, […]

I just had a ridiculous mini epiphany, but such are the ever growing personal side effects of non-linear consciousness and life. It was that it’s June 2021, which translates into it’s only six months until we enter 2022! What?! When did that happen? From my perspective the start of 2022 was a good bit in […]