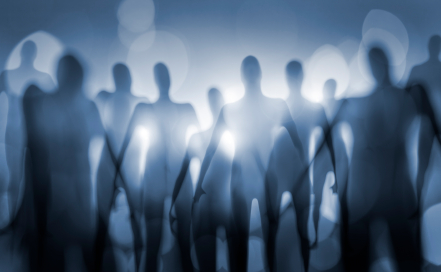 On December 3, 2004 while folding laundry in the afternoon I had a remarkable experience. I’ve had plenty of remarkable experiences throughout my life but this one was special and very different from what I was used to. With each passing year since that 2004 date, the more things I learn and remember, the more I realize how very important this experience actually was. Not just for me but for all of us.

I learned about a year and a half after the fact that December 3, 2004 was the last day of the Mayan calendar’s NIGHT Three. On December 4, 2004, humanity entered DAY Four, something to keep in mind while reading this.

Anyway, I was folding laundry in my bedroom and not thinking about anything really when suddenly I wasn’t in my bedroom! I was standing in some strange place that was completely blue colored. Everything was blue — the air, the space, the small group of five to seven humanoid looking beings standing there — everything and everyone was blue. It was like I was in a frequency that was the same as the color of deep blue.

Out of all that I experienced with this particular event, the emotional joy and sheer excitement of these blue beings was what struck me the most. They could not have been happier over the fact that I was there with them in their realm, dimension and frequency and that we were communicating face-to-face. I just stood there absolutely stunned at their profound joy and excitement over what was happening. So, what was happening anyway?

I’ve had contact with different nonphysical higher dimensional Beings since age three that I consciously remember so this wasn’t any new shocking experience to me. What was profoundly different however, was that I completely went to where They were instead of the more familiar situation of me speeding up vibrationally enough to meet Them in an energetic middle place so to speak. No, this was very different from what I was familiar with and that’s why these blue Beings were so excited and happy. I went to where they exist vibrationally—they did not energetically drop down to where I was.

They telepathed their profound joy and excitement over the fact that soon we—meaning humanity and Earth—would be energetically, vibrationally, speeding up enough to be able to enter their realm. They said that all of 2005 would be a period of energetic fluctuations where we would be moving back and forth between 3D physical reality and 4D, and in a couple of years we’d be ready to totally enter 5D reality.

I understood this to mean that I and much of humanity would be having a rather rough time sliding in and out of 4D dealing with the archetypal energies there and in us, but that on the other side of this was 5D, and that then the real Party would begin. More inner/outer transformations needed first evidently. Ascension is done in steps, many steps, with them getting smaller the farther we go.

They also told me that, “Bush & Co. will really begin to self-destruct due to the increased higher frequency energies covering the planet now, and to not give it much concern.” They used a term that I found very interesting. They said and I quote, “…that they will begin to energetically devour themselves…” (them meaning negative politicians and specifically Bush & Co. at that time) because of the ongoing energy increases and evolution of much of humanity. We (much of humanity) were soon not going to be energetically available to feed off of any more by negativity in any form. Remember that this meeting and exchange happened during the day of December 3, 2004.

They also told me that, “…we’ve always existed here, only inches away from humanity, but at a different frequency so you could not perceive or feel us or the Others.”

Don’t be surprised when soon you find yourself in a place and vibrational state where other nonphysical Beings/ETs/Starbeings exist and have for many ages, and you’re having a good old-fashioned extended inter-dimensional stellar Family Reunion.

Copyright © Denise Le Fay & TRANSITIONS 2007. All Rights Reserved. You may share this article so long as you do not alter it in any way, the content remains complete, credit is given to the author and this URL https://deniselefay.blog and Copyright Notice are included.

Anyone else experiencing their personal inner self, desires and life intentions abruptly shifted in the latter half of June 2022? I certainly have been, and it was completely unexpected, swift, intense and very empowering. I’d mentioned in my previous article that on June 14, 2022, I perceived that more human DNA had instantly been Restored […]

I know we’re only halfway through June 2022, but gads, what a month so far! That said, every month of 2022 has been and felt like nothing we’ve experienced before, and it all keeps evolving higher and deeper into the NEW Earth template, codes and frequencies. Welcome to life in the 2022 Divine Mother Feminine […]

I’m in no physical condition to write about anything at the moment, however, we’ve just gone through another big and important energy step towards the physical manifestation of ascending NEW Earth for NEW Humans these past few days. Because of this I’m pushing myself to get this written as quickly as I can. Many of […]